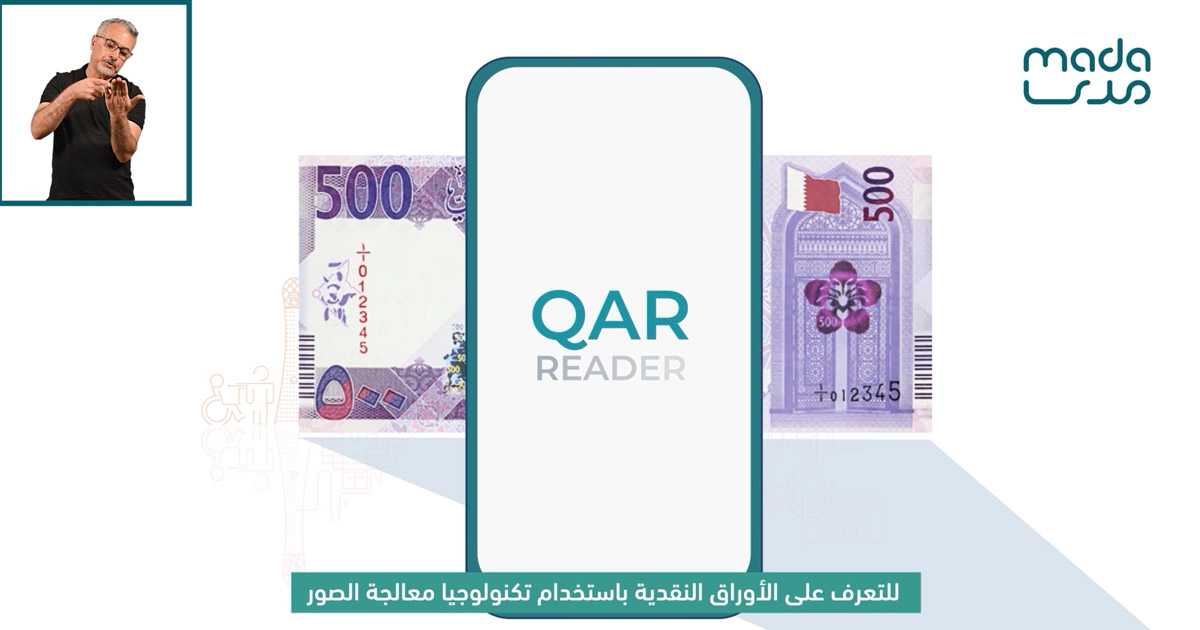 Through the Mada Innovation Program, and in partnership with Qatar Central Bank, Mada center has launched the new version of the “Qatari Money Reader” application on smart phones, one of the most prominent achievements of the strategic partnership between Mada Center and Qatar Central Bank, which aims to provide digitally accessible banking services.

Mada Center invests in the new version of this application to assist persons with visual impairments and the elderly with reading and identifying notes that are in their possession during purchasing, making it a new addition to the world of independent living for persons with disabilities and the elderly, which the center advocates within its strategy.

The Qatari Money Reader application is considered the first of its kind in the State of Qatar to combine the full extent of modern technology and the needs of persons with visual impairments and the elderly. It works through a smart algorithm that combines the capabilities contained in the smartphones and the database registered in the program to read the value of notes in both Arabic and English, to make a qualitative leap in the world of digital inclusion.

The Qatari Money Reader application is characterized as fully digitally accessible application for persons with visual impairments and the elderly, as it enables them to collect, organize and calculate the total value of notes through scanning them by a phone camera to determine their denomination, which expedites responses and facilitates transactions of users.

Additionally, the application is capable of functioning without connection to the internet, as it contains a database that includes monetary denominations used in the State of Qatar and supports some international currencies such as the euro, US Dollar, and pound sterling.

By supporting and launching the new version of the application, the center aims to ensure the independence of persons with disabilities and the elderly in all areas, especially banking transactions, which require a high degree of privacy and secrecy.

In alignment with Qatar Central Bank’s issuance of the new Qatari currency, which is characterized by special physical features to support persons with visual impairments and the blind, the Qatari Money Reader application, supported by Mada Innovation Program, targets the digital angle by using Assistive Technology to ensure facility of banking transactions.

In her statement, Maha Al-Mansouri, CEO of Mada Center, said: “we are proud to launch this application, which is the fruit of the strategic partnership between us and Qatar Central Bank, as we at Mada work with various partners and innovators to develop an ecosystem that is supportive of innovating Arabic technological solutions that promote digital access for PWDs and the elderly. We have held in the center discussion sessions with persons with visual impairments to study and identify all the challenges they face and take their advice during the developmental stage up until completion, in order to place all members of society on the same level of keeping pace with the latest digital developments and completion of governmental services, leading to complete independence, especially in banking transactions.

Supporting the development of the new version of the Qatari Money Reader application is considered one of the successes of Mada Innovation Program, which was designed to encourage innovators to find solutions in the Arabic language for persons with disabilities and the elderly, and to increase their availability in the Arab region through a set of grant programs and support of  entrepreneurs to provide a mechanism to bring relevant innovative Assistive Technology and accessible products and services to the local market and beyond, Which contributes significantly and effectively to improving the lives of persons with disabilities in Qatar and the Arab world and supporting their independence. In addition to the center’s firm and renewed belief in the importance of creating a market for the private sector in Qatar that meets the needs of the Arab world and raising awareness of the field of assistive technology among innovators.

It is noteworthy that a memorandum of understanding was signed between Mada Center and Qatar Central Bank on the sidelines of the QITCOM 2019 exhibition, and the launch of this application is one of its most important achievements, in addition to many achievements, such as: 11 ATM machines met the digital accessibility standards of digital platforms, building capabilities of Qatar Central Bank’s employees and employees of a number of different banks by providing “six” training workshops in the field of digital accessibility and assistive technology, which varied between special trainings and open trainings that covered creating digitally accessible documents and creating digital platforms that comply with web accessibility standards. Including ATMs, mobile applications and websites that ensure easy and accessible electronic banking transactions for people with disabilities. Mada Center has also worked with the Qatar Central Bank to raise awareness of digital accessibility, with the aim of empowering and integrating persons with disabilities and the elderly into society.

Skip back to main navigation